SUCCESS IN A BUCKET OF TAMALES

For almost all of my adult life I’ve been working for public transport. For many years I drove for South Wales Transport in the Llanelli and Swansea areas and then for a while in London. The last 20 something years, I’ve worked here in Los Angeles County, sunny southern California. I have a very high opinion of what I do; sometimes I suspect my opinion of mass transit is higher than the management and politicians who are in charge. Mass transit is essential to modern civilization. When viewed on a macro level it becomes very easy to lose sight of the individuals. Those people who need public transport are viewed simply as a group and are figured into planning as a group. Bus drivers see things differently, and bus drivers see real people every day.
I used to drive the 66 line in Los Angeles, it goes from the Wilshire and Western area, through the city to East L.A. Doesn’t mean much unless you live here but it’s worth mentioning that the line goes through the Hispanic communities and some very poor neighborhoods.
One young man would catch my bus regularly, he worked all day for a little above minimum wage then he would ride home on this overcrowded bus. He never had a place to sit so he would stand at the front and we got to talking. His frequent subject of conversation was all about how proud he was of his wife. While he was in work, she would be taking care of their two children and taking care of the rented apartment. She would also be making Tamales. He said they were the best Tamales anyone ever tasted. As soon as he got home he would pick up this bucket, filled to the top with his wife’s cooking and catch the next bus to McArthur Park. (Anyone who has seen the movie “Volcano” has seen McArthur Park) The tamales would all be sold in less than an hour he would tell me.
It’s been a few years since I have seen this young man, I’m in management these days so I don’t drive the buses anymore, but I think of him often. I never heard him say anything negative and I can’t help but believe that he and his wife are going to make it. With that kind of optimism, that kind of work ethic and that kind of sticking together and working together they are certain to succeed.
The other thought that occurs to me is; one day, when they are materially successful and reaping the harvest of their efforts, they may look back and see these days as the happiest days of their lives.
Posted by Pete at 9:19 AM No comments:

Dirty Jokes from the Old Man

My big plan was to write a series of rather serious books on the subject of Magic. I have very clear ideas of what magic is and how to bring it into your life with some astounding results. I'm learning all about self-publishing and the joys of Kindle and it's fun learning about this new and exciting medium.
My first two books are in the series I've called "The Tools of Magic" It seemed to be going well until I began my third book "The Magic Wand"  The observant reader will notice it hasn't been written yet.
I know what to write but I just couldn't make it flow. Nothing seemed to come out the way I intended. The authors that I converse with online suggested that I put it to one side and write something totally different. Then I would be able to go back to it with a refreshed state of mind.
Here it is, something totally different. "Dirty Jokes from the Old Man" I love storytelling and I do have a twisted sense of humour. They were fun to write, some I heard over the years, some are new and some are ones I've made up from experiences I have had in my wicked and sinful life. No! I am not saying which ones fall into that last category. Some are just people in funny situations. I have a chapter of newspaper clippings, "Why Newspapers are fun to read" it proves that real life can't be written, it's just too damn funny.

TRIQUETRA, The circles of our lives. 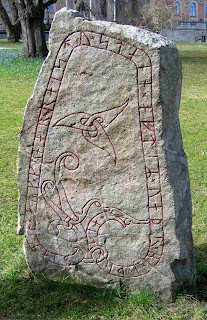 The Circles of Existence, sometimes called the Triquetra became popular as a result of the television series "Charmed" In that television series it is represented on the cover of the Hallowell sister’s “Book of Shadows” A book containing spells and incantations passed down by generations of witches. The Triquetra has a much older representation. The word “Triquetra” is a Latin word that translates as “Three cornered” However for the ancient Celtic people it had a sacred and special meaning. The Symbol has been found carved on stones in various parts of North West Europe and is found on the Irish Book of Kells. Its widespread use marks it as something more than decoration. We find the answer to the question of its meaning in ancient story and legend.

Here is a much older definition. Welsh words are used. There are literal translations of these words but they do not sufficiently convey the meanings. Certainly not in the context they are used in the old Welsh Myth and legend.

The first Circle is called "Abred"
This is mortal existence. This is where we are now. Abred encompasses this Earth and all the other Worlds that exist on this material plane. We are born to live out our mortal lives here in Abred. This mortal plane, this Middle Earth, is not some punishment nor is it a testing ground. It just is. It’s the place where we live a mortal existence and experience the “Cause and Effect” laws. Here our actions, whether good or bad have an effect and we must keep coming back here until we have wiped out all of our footprints. When we have learned to live without disturbing the flow of the universe then we will be ready to move on. Until then we are caught in the circle of our mortality. This story illustrates the dilemma;
“There was once a priest whose duty it was to sacrifice goats. One day while preparing a goat for sacrifice he heard the goat laugh, a very human laugh. Surprised, he asked the goat why he was laughing. The goat explained that for the past 500 years he had been born as a sacrificial goat, to die on the altar and be reborn only to be sacrificed again but this time he was to be reborn as a man. The priest was pleased for the goat but then he saw a tear in the goat’s eye. He asked why the goat was sad. The goat replied; “Because 500 years ago I was a priest who sacrificed goats.”
Annwn, The Otherworld 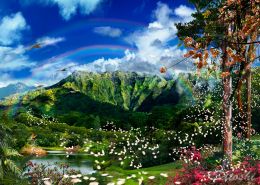 The second Circle is "Annwn"
When we pass from this mortal existence our spirit, that essence of us that is truly us, enters Annwn. For those who die bravely and honorably in battle this is a place similar to the halls of Odin in Scandinavian legend. Annwn is also a place of rest and reflection; it can be a home of joy and delight for those of a less warlike nature or for those who wish to rest from war. For the wicked it can be a grim and forbidding place but it is not an eternal resting place for anyone. After we absorb what we have learned and experienced we prepare for our re-birth.
We die into Annwn and are born into Abred to die into Annwn and so on.

Gwynfyd, The "White Life'
The third Circle is called "Gwynfyd"
When we have passed all the trials of Abred it is time to move on. Now we go to Gwynfyd, known in Irish as "Tir na Nog" the land of youth. Here, in these undying lands, we face other adventures. Little is known of this Circle. Only that in each transition from Abred to Annwn we become better prepared for Gwynfyd.
The Ceugant

Now it is time to add the three Circles together, where they intersect forms a sacred symbol that we have come to know as the Tri-Quetra.
There are beings that are able to travel freely between all three Circles or spheres of existence. These beings are said to live in the "Ceugant" Sometimes a fourth Circle is added to symbolize the Ceugant itself and the wanderers traveling through the three Circles.
This is the symbol of the Ceugant and the travelers of the Multiverse.
Posted by Pete at 8:31 PM 1 comment: